At long last I’ve reached the final part of my series for 2013’s anime of the year.  Keep in mind that this is not a ranking of which anime I think other people would enjoy or which anime I thought was the most popular amongst the anime community as a whole.  This is solely my conclusion based not only on how much I enjoyed these series, but also on a wide range of technical accomplishments I observed–from musical composition, art style, plot development / writing and many other important details. But first, a quick summary of the titles I’ve covered so far.  Click the section headers to read each part of my countdown in greater detail.

Finally the moment you’ve all been waiting for.  The top five and my pick for anime of the year 2013.

END_OF_DOCUMENT_TOKEN_TO_BE_REPLACED

In case you’re just joining me as I count down to 2013’s anime of the year, be sure to go back to the beginning with (25-21), (20-16) and (15-11).  Just to be clear, if you research my posts throughout the year at the conclusion of each season, I may have reordered some of the titles for anime of the year–it just can’t be helped.  While I used those reviews as a starting point, I have to judge some anime based on how much of an impression they’ve left on me several months later as compared to other titles that are fresher in my mind.  If you disagree with my conclusions, feel free to leave a comment explaining why you think so. 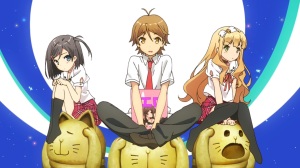