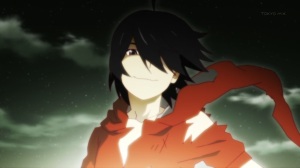 Each time we’ve revisited this amazing philosophical comedy, it has unfortunately decreased in quality—relatively speaking.  A franchise that was my anime of the year for 2009 and took my number six spot last year still tells really smart stories portrayed by a top-notch cast of voice actors.

All of the spirit of the moe characters I love that have been produced by Kyoto Animation have been encapsulated into a supernatural action series with just enough romantic elements to keep up the tension while not being overbearing. 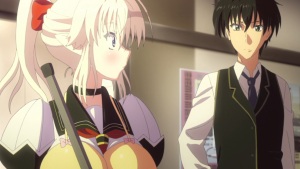 This is such a positive anime about people making really good lemonade with the lemons that life has given them and an unlikely romance that shows how even in the most absurd circumstances, love finds a way.

Just the right balance of silly and badass.  This is one of those magic girl anime that knows it’s a magic girl anime and occasionally cuts right to the heart of its subject material to tell a good joke.  Better than Fate/Zero.

The story of the underdog is a compelling one, and that could have been enough.  But what this anime did to challenge our perceptions about gender roles was not only groundbreaking, but the way it managed to be so straight-faced and serious about it was truly impressive.