Based on its art style and a three-sentence description I’d expected Kotoura-san to be a two-dimensional moe anime.  However, what I got was a rollercoaster ride of emotions that really caught me by surprise.  The first half of this episode encapsulates Kotoura’s rough childhood and the troubles that come with her ability to read minds and her good-natured honesty.  It’s a truly disheartening series of misfortunes that shows what becomes of people who can’t be honest with themselves, but are then confronted with their own inner truth.  In this way, Kotoura is the knife that’s peeling away the mask that people wear to play the game otherwise known as, “being social.”  I can understand her pain, but perhaps it reflects poorly on me that I wouldn’t have chosen to be so frank if I had the ability to read minds; using my ESP to live a more advantageous life. 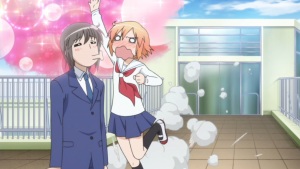 The supposition that most people would be ashamed to have their inner thoughts broadcast to others appeals greatly to me because I can say with a fair amount of certainty that my thoughts are an honest reflection of my actions.  I take great pride in the path I’ve chosen to live a life free of hypocrisy within my own character.  I’m not ashamed of who I am and because of this, I identify strongly with Kotoura-san’s male protagonist, Manabe, who similarly takes his classmate’s mind-reading ability as a chance for self-improvement (when he’s not broadcasting his fantasies).  This change of circumstances from Kotoura’s lonesomeness and off-putting attitude to finally meeting someone who can push her to open up is fantastically written and shows a lot of potential for future growth.  If I was to give a criticism to this anime, I’d say its cute visual design devalues its very serious premise.  But if that’s all I have to complain about when I’m already an admitted moe fan, then I’m going to give it a pass and remain on the edge of my seat, expectantly waiting to see what will become of this unexpectedly sophisticated anime.

One response to “Kotoura-san Ep. 1”